A downloadable game for Windows

A Rush of Blood to the Head

Project Inertia is a stage-clear 3D action platformer with a focus on speed, style, and flow. The main objective sees players clearing stages in the fastest time possible whilst doing so in the most stylish way possible.

You play as Jessy, a new recruit amongst the largest delivery company in the world, Sword-Surf Inc.  As a new recruit, your skills are put to the test as you are immediately given the task of delivering a package to Mineral-Mike, an avid rock collector on the other side of the wastelands.

On their adventure, Jessy is equipped with a Surf-Sword - a unique device that acts as both a defensive weapon and a mode of transportation.

Jessy can swap between two different control schemes during gameplay – one that derives from platformers and one that controls similar to skating games.

Walking Mode offers more vertical movement at the cost of speed, whereas Surfing mode gives the player speedier, looser controls with the ability to perform tricks.

Project Inertia features two fully featured levels of which only Jessy has the ability to traverse.  Streak across the digitized skies of Cyberspace to collect Mike's package, then dash across the twisted wastelands of Risky Rails to finally deliver Mike's package.

There are a few interesting shortcuts that Jessy can take through the use of grind-rails and following the Kinetic Instinct inherit within them.

NOTE: I ignored any common university game issues like for example, the camera experience (was poor, and I know its quite hard to do cameras in games), because you usually don’t have enough time to fix things like this. I’ll mainly focus on gameplay.

The electronic music fits the theme of a 3D-Action Platformer where you do cool tricks on time-based levels. Your art and models were also good. I liked the VFX on the Surf-Sword. You took an interesting approach and re-used assets in different ways to make your levels unique. Terrain was simple, feels sorta natural.

Cyberspace was controlled environment where I could see where I needed to go. The end part was a little confusing, I couldn’t see where the end was. I would suggest using a beacon instead of an arrow.

Risky Rails was a lot more confusing, and I usually just fall out of the track, and just get stuck. There was no way to reset. I usually climbed out of the ditch, and if I couldn’t I would Alt+F4.

You can fall out of the world.

I think this could have been an interesting game, and it sounds really good as a concept. Maybe do a re-make in the future. 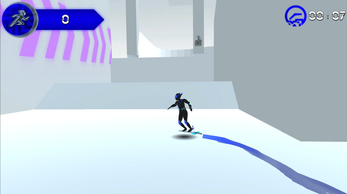 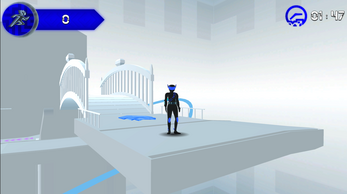 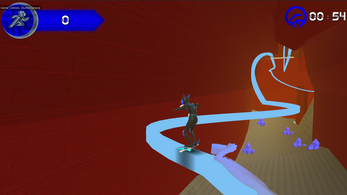 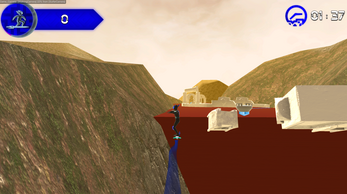 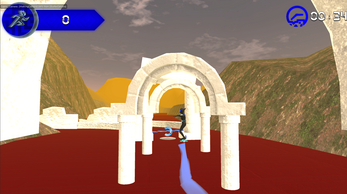 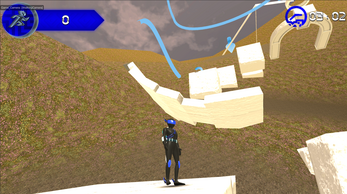 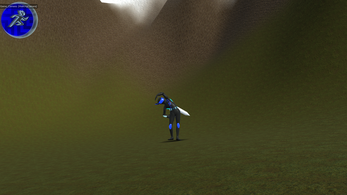